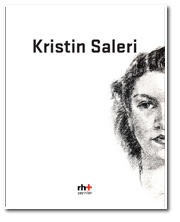 “Discovering Kristin Saleri” is a project initiated in 2010 by her three children to capture and memorialize her immense, albeit not yet fully recognized, contributions to 20th century art.

The Kristin Saleri book features a large portfolio of Kristin Saleri’s paintings, art critic reviews, her biography, and a look back through photos.  In it you will learn how Kristin Saleri of Armenian descent, was an artist of considerable prominence in the Turkey of the 1950s and the 1960s.  Saleri was recognized as a child prodigy at an early age.  She received her initial art training from Prof. DeMille and Feyhaman Duran Studio at the Istanbul Academy of Fine Arts and later under the direct tutelage of artist Andre Lhote in Paris.  She was among an important generation of artists in the country who became an integral part of the Ecole de Paris after the Second World War.   Kristin Saleri is remembered in this book not simply because she was among the pioneering generations of Turkish modern art, but for producing a record of a time when life in her native land was changing beyond recognition. A prolific artist, she produced over 3,000 (the exact number being unknown) pieces of art during her long career in Istanbul.