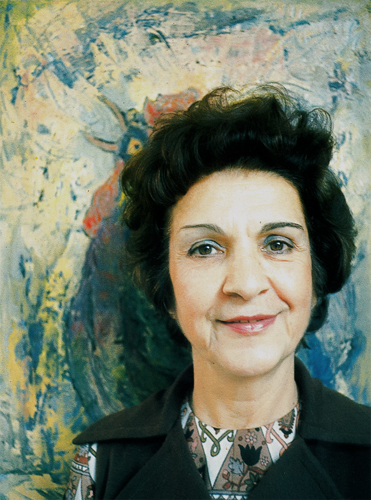 A prominent 20th century Armenian artist from Turkey, Kristin Saleri was born in Silivri, a small town nearly 150 miles west of Istanbul. She produced over 3,000 pieces of art (the exact number is unknown) over a long, vibrant career in Istanbul until her passing in 2006. Oil paintings made up her predominant art medium, while ceramics, glass, and charcoal played alternatives channels to her passion for artistic expression.

Saleri held over 40 private shows mainly in Istanbul and Ankara and contributed to hundreds of group exhibitions around the globe including Paris, Monaco, London, Brussels, Athens, Washington, DC, and Yerevan. Her works have been acquired by the Paris Centre Pompidou, Calouste Gulbenkian Foundation in Lisbon, Yerevan’s Armenian National Gallery of Art, the Rupen Sevag Museum in Etchmiadzin, Yerevan, the Istanbul Painting and Sculpture Museum, Ankara National Museum of Art, and private collectors worldwide.

This prolific artist received numerous recognitions in Turkey and globally, most notably:

Influences that Shaped Her Art

Saleri was the youngest of five children parented by Onnig and Eftig Agopovich. Her uncle Rupen Sevag (1885-1915), a leading Armenian intellectual, medical doctor, poet, and officer in the Ottoman Army, became one of the early victims of the tragic events of 1915, her year of birth, and ironically the darkest year for Armenians worldwide. 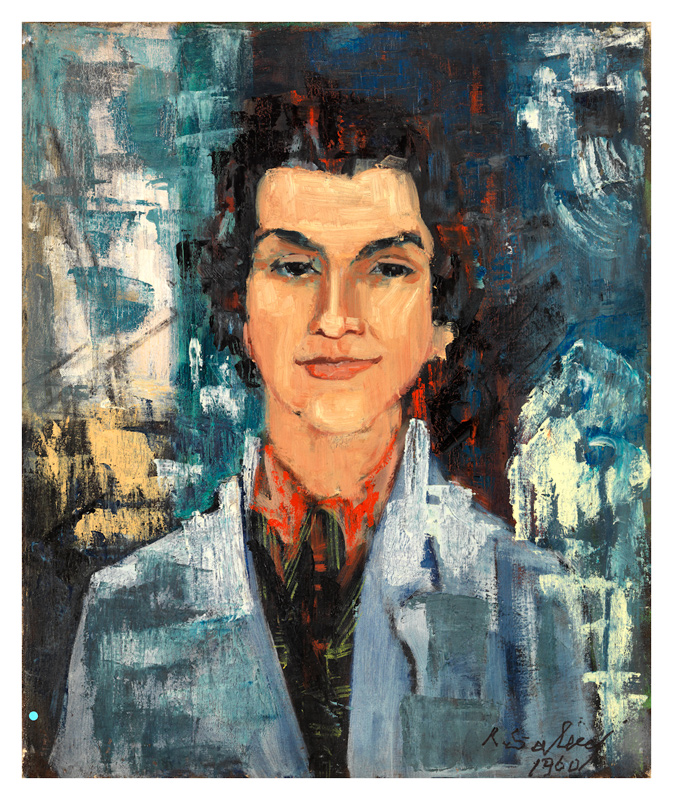 Recognized as a child prodigy at an early age, she received her initial art training from the Professor DeMille and Feyhamen Duran Studio at the Istanbul Academy of Fine Arts (circa 1932-1935).

In 1943, she married Agop A. Saleri, a talented engineer with dual degrees, Master of Science in both Electrical and Mechanical Engineering. He became her lifetime soulmate, fan, and stabilizing force. Together they raised three children, Rehan N. Saribay (née Saleri), Nansen G. Saleri, and Alen J. Salerian.

In 1955, she studied for a time at the Ecole de Paris under the tutelage of André Lhote, a contemporary of Picasso, and was exposed to the works of Matisse, Cezanne, and Van Gogh. Her initial style developed into a distillation of these influences while the underlying messages, both direct and subliminal, evolved over her lifetime with spiritual, sensual, and social undertones. In the words of German scholar Çiğdem Gül1, “…she grew up in two contrary (Armenian-Turkish) cultures and (Christian-Muslim) religions in the midst of many others. In this intercultural and interreligious context, she had the multi-perspective privilege of deciding each time anew what to choose.” The result is Kristin Saleri’s transcultural, trans-religious world. 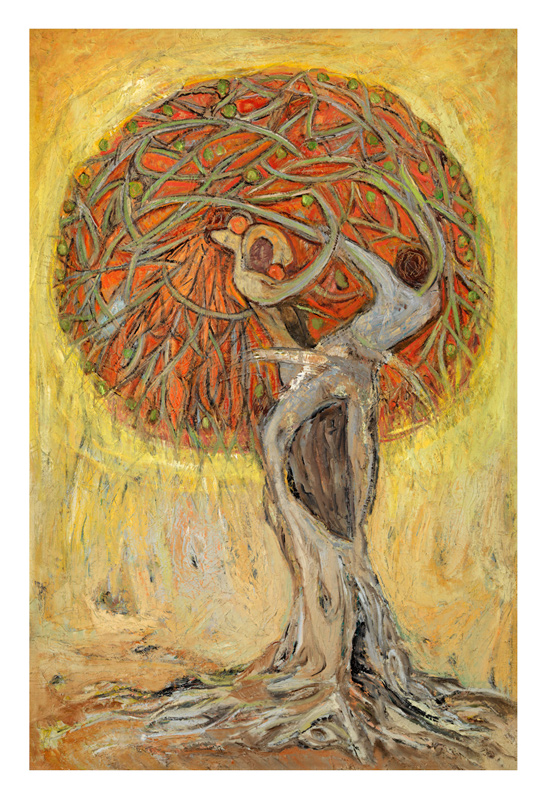 She was undeterred by the hurdles of being a female artist of Armenian heritage in a period of social and ethnic strain in post-World War II Turkey when the use of the “g” word in reference to 1915 events was punishable by law. She became a leading force in both Turkish and Armenian art communities, becoming cofounder of the International Turkish Female Artists Association (1965), cochair of the Turkish Painters Association (1965), and using her art to convey a message of feminism, healing, and rebirth.

Critic and art historian Morgan Falconer2 offers the following comment, “For Kristin Saleri, art was not only proof of humanity’s better nature, it was also a medium through which humankind might be brought together. It was a universal language.” It is not a coincidence that she brought Anatolia, the cradle of world civilizations, to life through her works.

Messages Subliminal and Not…

One can point to a dozen or more subject matters in the artist’s 3000-plus works such as fishermen, orchestra, trees, nudes, children, folklore, portraits (Img 1), etc. More relevant, however, was her attraction to certain recurring themes, that revolved around spirituality, search for harmony, and her own feminist and independent social commentary certainly influenced by her Uncle Rupen Sevag’s ever-present legacy.

Kristin Saleri was not a religious artist by standard definitions of religiosity, yet she was deeply spiritual.

According to Falconer, one of the motifs she returned to again and again was the Tree of Life (Img 2), an ancient symbol given Christian associations by its centrality in the story of Adam and Eve. Saleri often paints the Tree of Life as a universal symbol – a symbol for all people, all religions, and all time – but just as often she will show Adam and Eve entangled in the tree and reaching for apples.

Rumi and Sufism were also an integral part of the artist’s spiritual world. She often traveled to Konya in Central Anatolia, considered the unofficial capital of Sufism. She was captivated by whirling dervishes (Img 3) and their perceived connection, in her imagination, to God.

She was an exceptionally hardworking artist who adored hard work and workers – sentiments manifested in paintings of Ulkiye (Img 4), the peasant woman from the Black Sea, as much as the Fisherman series (Img 5)(which also carried the Christian symbolism of abundance and miracles.)

Her fear of being forgotten and desire to assure a lasting legacy were paramount as highlighted repeatedly in her conversations with her children in the 1990’s and early 2000’s. To the persistent question as to the meaning of the remarkably divergent themes of her art. she would simply say, “Life.” 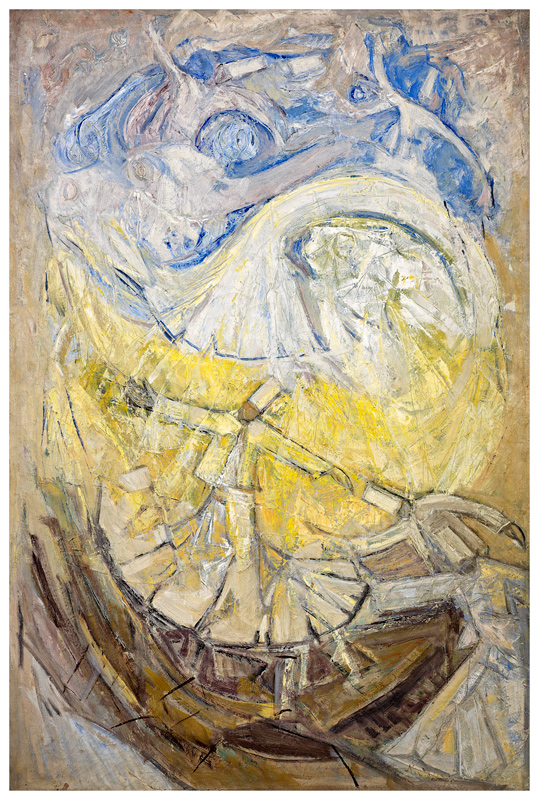 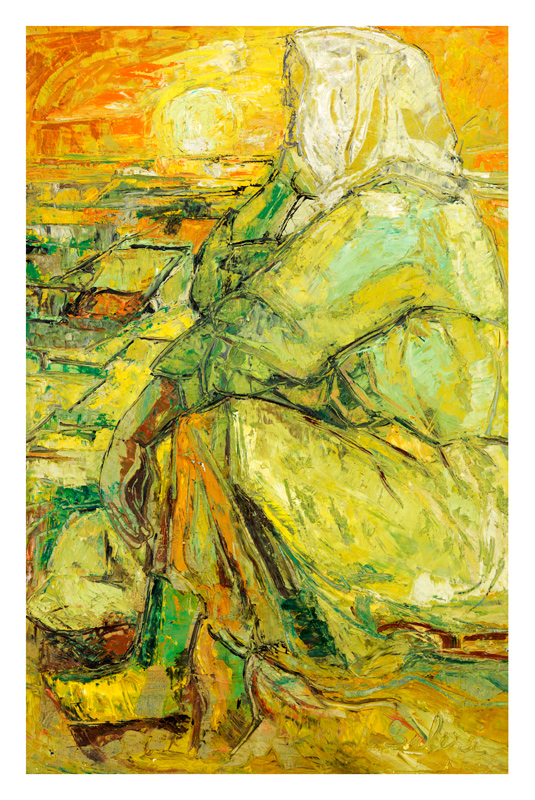 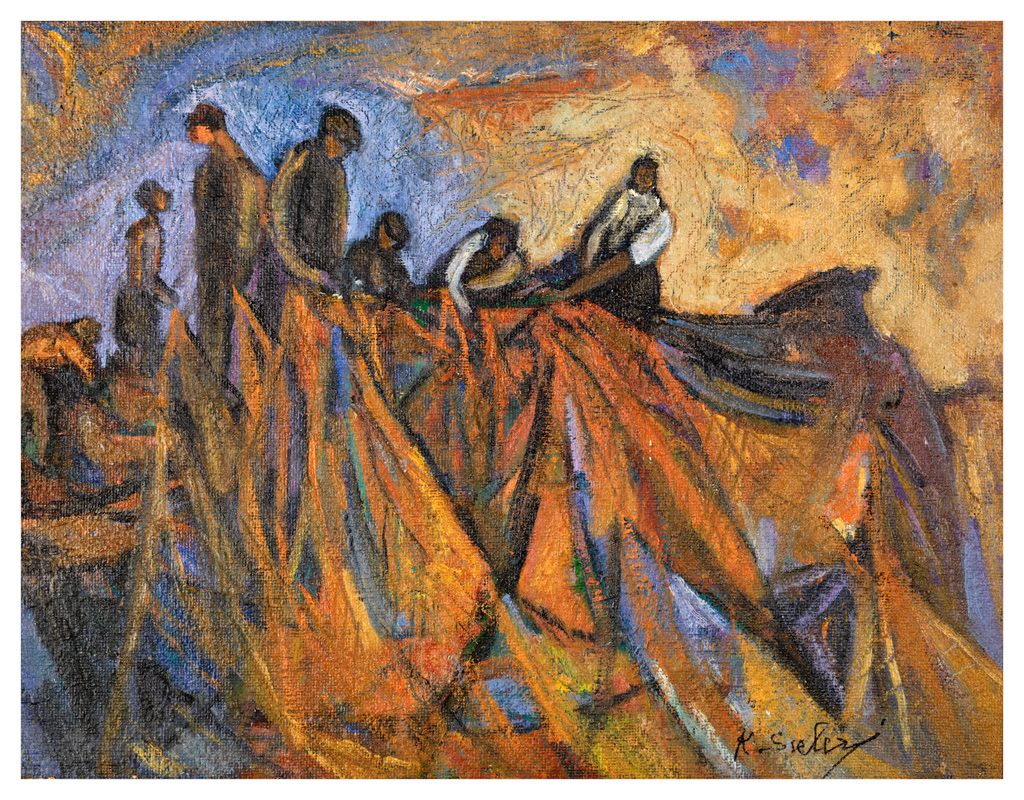 Beauty and harmony, two ever-present elements of Kristin Saleri’s depiction of life come alive distinctively in her Dance and Folklore series (Img 6 and 7).

Perhaps nothing reveals the intended message of her art as compellingly as what Saleri chose, almost a decade prior to her death, to be cast as a relief on her marble tombstone at the Armenian Cemetery in Şişli, Istanbul. The Grand Bouquet (Img 8), a painting about children and balloons floating in air forming an image of a bouquet of flowers.

As Ara Güler, her contemporary artist friend and world-renowned photographer said, “…was Kristin Saleri a time-traveler? Is that why she worked tirelessly to design her tombstone?”

“Discovering Kristin Saleri” is a project initiated in 2010 by her three children to capture and memorialize her immense, albeit not yet fully recognized, contributions to 20th century art. 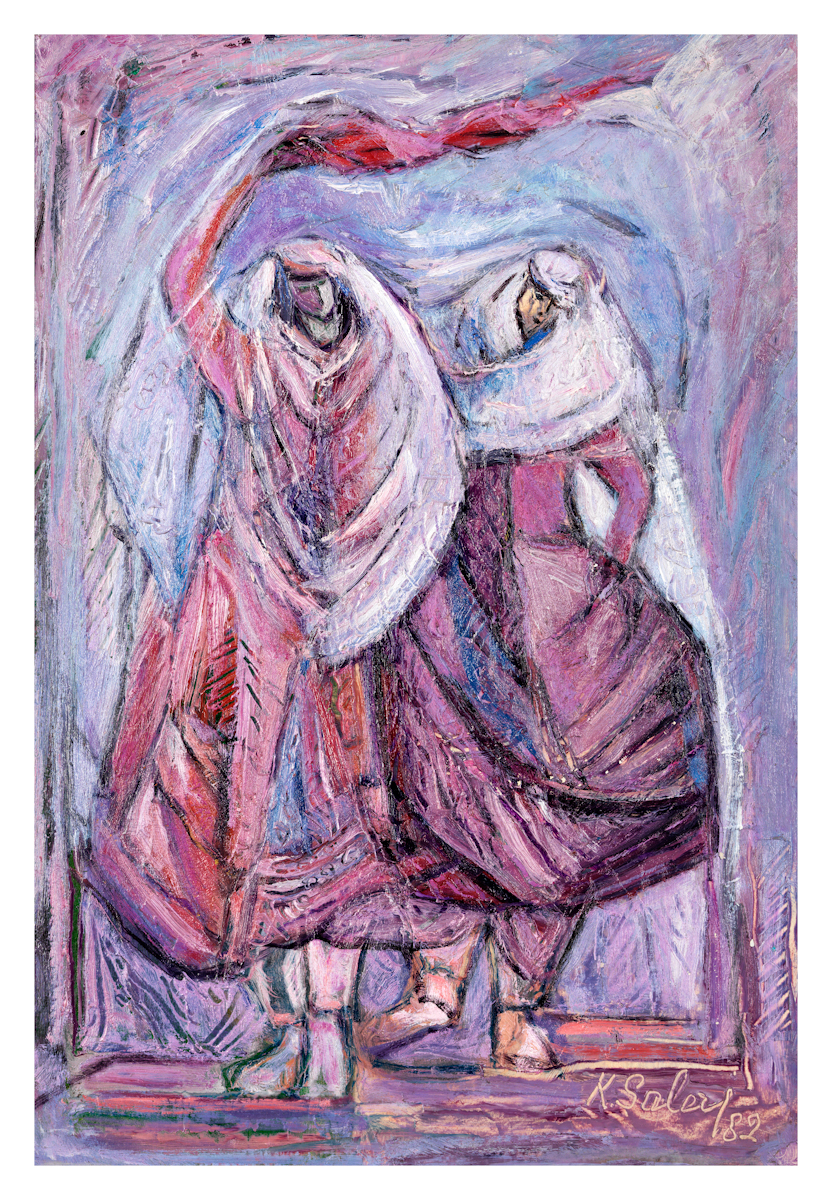 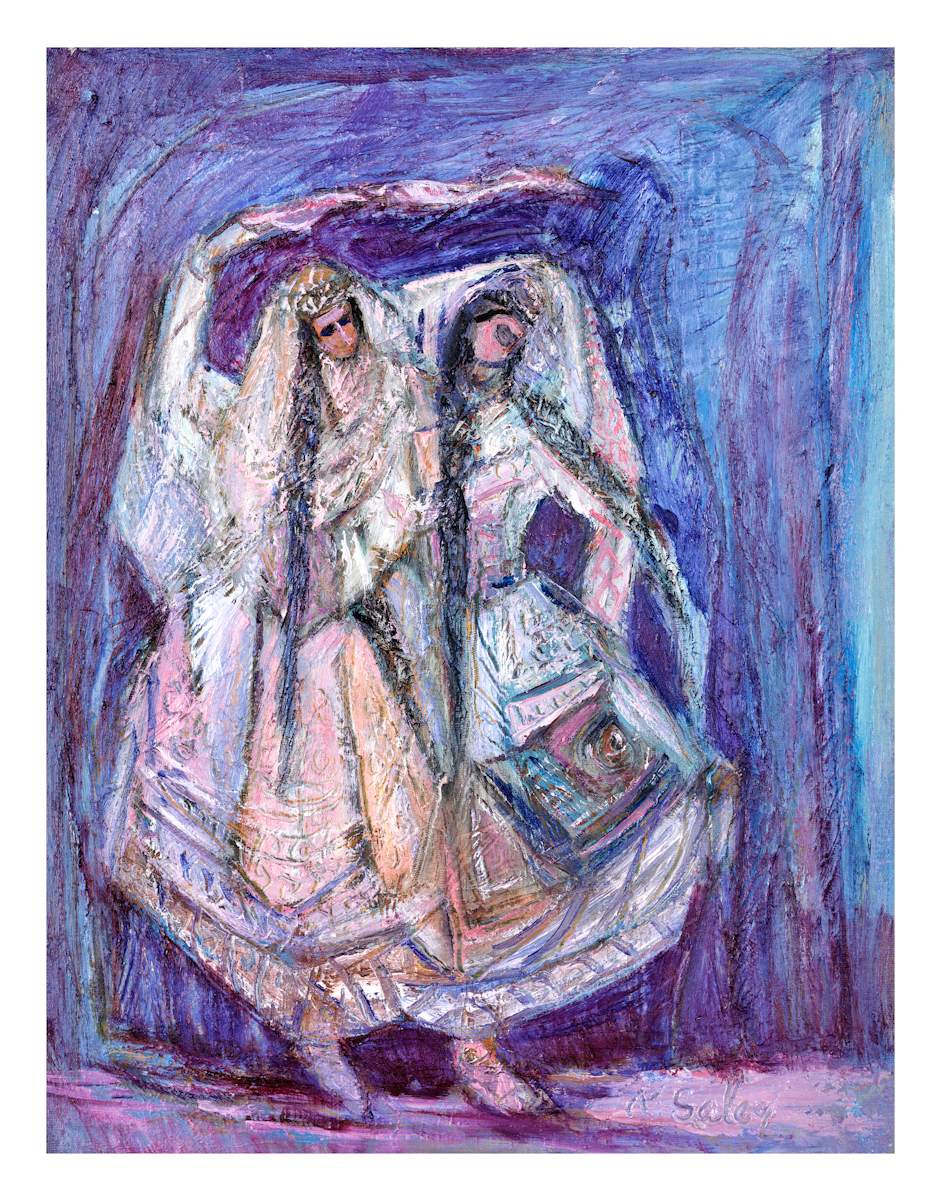 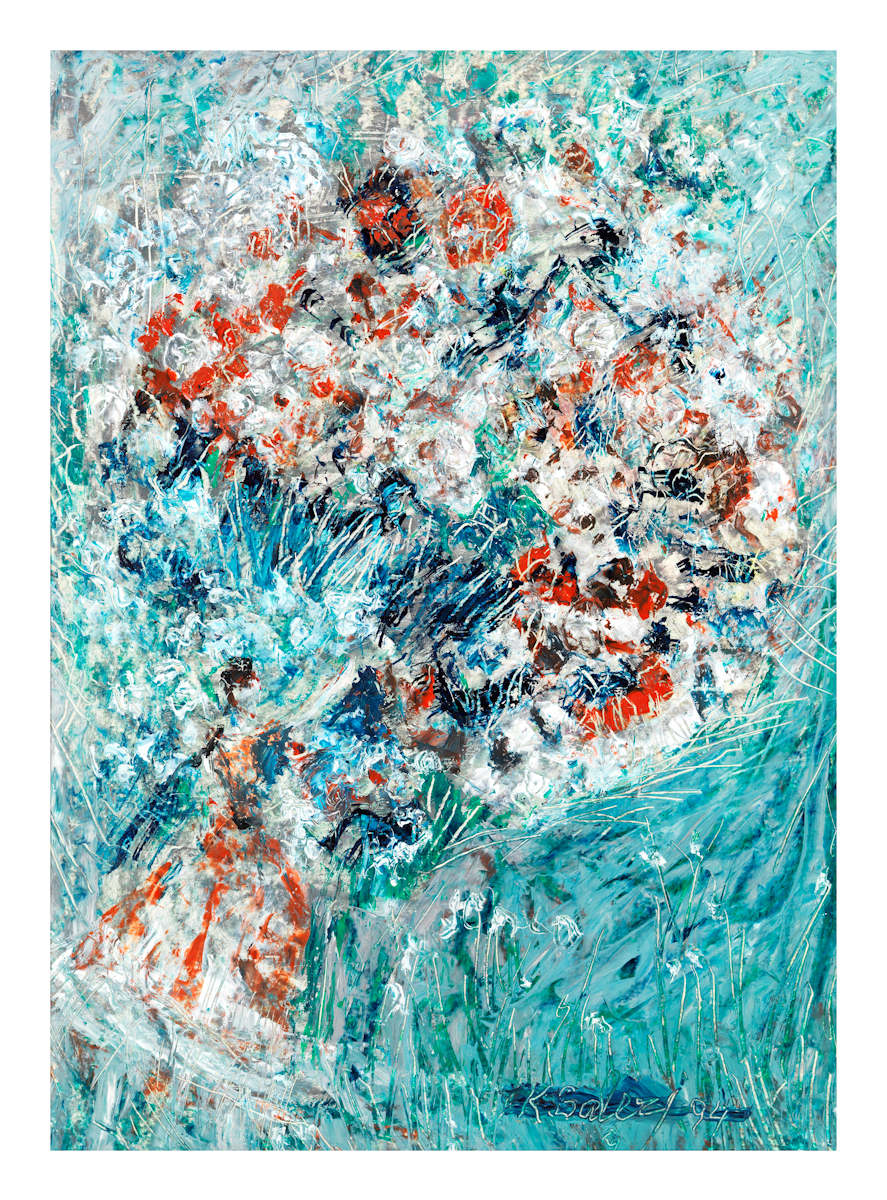